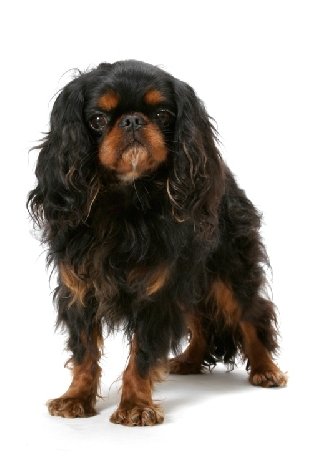 Meet our cute and affectionate featured breed of the week, the English Toy Spaniel. This breed loves spending time playing and cuddling with their owner and rarely leave their side. They can be surprisingly reserved with strangers as they are very picky about who they give their affection to. One of the typically quieter toy breeds, the English Toy Spaniel can be a great addition to almost any family and living space.

For a breed that’s been around for so many years, it’s amazing how well-documented their history is. During the 16th century, ‘exotic’ type lapdogs were all the rage. During this time, the English Toy Spaniel was developed with it’s immediate ancestors being the Pekingese and Japanese Chin. Many artists during the 16th century loved painting the English Toy Spaniel with their very easy-going personality, they aren’t your typically high-energy small dog and generally prefer to just lounge around most of the day (making it much easier to paint!). This breed goes by many other unofficial names such as Toy Spaniel, King Charles Spaniel (different from the Cavalier King Charles Spaniel, and ‘Charlies’ (after King Charles I and II who both favoured this breed).

‘Charlies’ are not high-energy dogs, but that doesn’t mean they aren’t speedy! Although they prefer to lounge around, they absolutely love to chase things that move fast. If a butterfly happens to catch your Toy Spaniel’s attention, they’re off on the hunt in a second! They can get along well other pets and young kids as long as they’ve been introduced early and well-socialized. English Toy Spaniels can be goofballs and have tons of affection to give, but they are very picky who deserves their affection. You will find this breed likes to pick favourites amongst the people he meets and only those people will see the Toy Spaniels more outgoing side.

English Toy Spaniels are great dogs for first time owners. They are fairly easy to train (albeit a little stubborn at times) and will really work hard to please the people they are bonded to. They don’t require much exercise, but are also more than willing to go on a hike with you! Anything you are planning for the day, the Toy Spaniel wants to come with you! They do well in almost any living situation, they are small enough for apartment living and are very adaptable dogs. They only thing they don’t adapt well to is being left home alone all day as they crave attention from their favoured human companion.

This breed needs a lot of maintenance to keep looking their best. With their short muzzles, their faces are perfect places to gather up dirt and debris, so it will need to be wiped daily and after romping around in the garden! They need to be brushed about twice a week to prevent matting in their hair. They should go to the groomer for hair trimming once every 2-3 months. Especially in colder weather, when the hair on their feet and legs gets too long, water will freeze on that fur and can contribute to frostbite. In hot weather, the same area of fur can develop tangles covered in mud and dirt and be very uncomfortable and cause skin irritation if the hair is not kept trimmed.

‘Charlies’ can be a perfect companion dog for a first time owner, especially for people living on their own as English Toy Spaniels like to pick one person to give all their love to. With their easy-going and gentle nature, they are great company to bring to pet-friendly offices. They rarely bark and prefer and slower, quieter lifestyle. If you’re looking for an adaptable and loving small dog, consider the distinguished and sweet natured English Toy Spaniel!