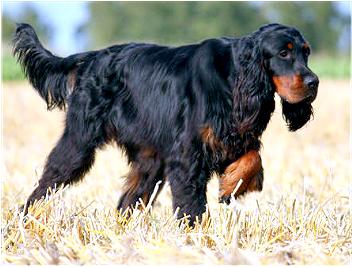 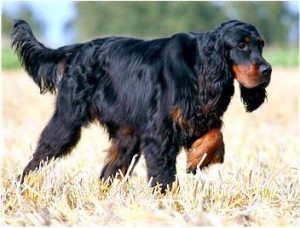 Our super loveable featured breed this week is the calm and graceful Gordon Setter. These gorgeous dogs are part of the setter family (alongside the Irish setter and English setter). They are large, alert dogs ready to take on any task, but also have a silly side!

Black and tan setter-type dogs are recorded in Scotland as far back as the 16th century and it is widely believe that these were the ancestors to the Gordon Setter we know today. The breed became more popular in the late 17th century and were mostly kept and bred at the Gordon Castle near River Sprey. The breeder of these dogs had the goal in mind of a sturdy hunting dog, able to do accurate ‘air-scenting’ for game birds. Although these dogs were not the fastest hunting companions, they were amazingly accurate (would not give many false ‘alerts’ to the hunter) and had great stamina to continue hunting through the day with very little rest.

With their amazing stamina and scent work abilities, it’s no wonder the Gordon Setter Breed can often be found competing in field trials. As their ancestors would generally work with only one hunter all the time, this has translated to the breed being a bit standoffish with strangers today. As well, the Gordon Setter needs a lot of socialization with other dogs and animals. The Gordon Setter get jealous very easily so it is important for them to learn how to nicely share toys and affection with other dogs. The Gordon Setter has a lot of love to give and can also be prone to separation anxiety so be sure to find ways to keep him busy and active all day, and to practise entering and leaving the home calmly to not promote separation anxiety.

The Gordon Setter is a very intelligent dog and once they have bonded to an owner, they are very trainable. But if the Gordon Setter doesn’t know the person well who is giving commands, he is likely to just ignore them. They take loyalty very seriously! The Gordon Setter can get along great with kids when they have been socialized and the kids are respectful, homes with very young children are not suitable for Gordon Setters as these dogs have a tendency to jump on people and be a bit rambunctious. Gordon Setters generally prefer to be the only dog in the home as they can sometimes get jealous of their owner giving affection to anything that isn’t them!

The Gordon Setter has a black and tan coat that is naturally long and feathery. This breed can also (very rarely) come in other colour variations such as red or buff, but these colour variations are not ineligible for showing (although they still make wonderful family pets!). Their fine hair should be brushed and combed 2-3 times a week to keep out tangles. The hair on the feet should be trimmed once every couple of months, depending on your personal preference. Many groomers recommend you bathe a Gordon Setter once every 2 weeks. As bathing too often can easily dry out the skin, you may decide to bathe less frequently, or use a very sensitive shampoo formulated for frequent dog bathing.

These loving companion dogs are still to this day dominating field trials and out alongside their owners on the hunt. Although a bit standoffish with strangers and new dogs, they are truly one of the most loyal dogs you will find.