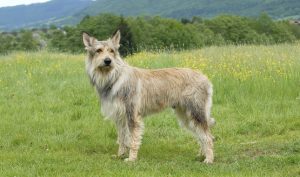 This week we are featuring a French dog breed, the Berger Picard. You may recognise this dog from the novel-based 2005 movie ‘Because of Winn Dixie’. While many people think the star of the movie was a mixed breed, it was in fact the lovable Berger Picard!

The Berger Picard is thought to be one of the oldest dog breeds belonging to the sheepdog group. The Picard breed was developed in 9th century France. They were bred for herding livestock and many in France are still used even today as herding dogs. Many Picard enthusiasts debate over the Berger Picards relation to other breeds. Some say they are closely linked to the Briard, while other say they the Belgian Shepherd. The breed almost became extinct during World War I and again during World War II. Although breeders fought very hard to keep this wonderful breed going, it is still considered to be a very rare dog breed today.

This wonderful dog breed got the starring role in ‘Because of Winn Dixie’ because of its scruffy mutt-like appearance. As with many movies that have animal actors, the director needed several dogs to perform so that when one dog needs a break they can bring in another doggy actor to take over. So to stay true to the novel of having a mutt-looking dog, but also keep consistency amongst the several doggy actors, the director decided to go with the Berger Picard breed.

One benefit to the Picard being a rare breed even today, is that there is less chance for ‘over-breeding’ which can result in many health and temperament issues. So the Berger Picard remains to be a very healthy breed with a life expectancy of 12-15 years and very few major health problems.

The Picard is a great family dog, he can get along very well with children and other pets when socialized properly. The Picard is often very standoffish with strangers and needs a heavy focus on how to stay calm and relaxed around new people. Many Picard owners will tell you their dog is the pickiest eater. You will need to take plenty of time finding the right food that is nutritionally balanced that your dog will also enjoy. Picards are notoriously picky-eaters and for this reason are often not motivated by food during training sessions. Lucky for you they are very loyal and absolutely love to make their owners happy, so often times praise is worth more to them than a dog treat.

This scruffy dog breed is super low-key when it comes to grooming. They have a double coat with a rough, wiry top coat. The Picard has a naturally lower oil content in their fur, which is what helps to give them that scruffy, tousled appearance. This also helps to make it very rare to get matting in the fur, as well as dirt seems to just rub right off of them, resulting in a less smelly pooch! Their coat sheds twice a year, and they only need to be brushed about once a week.

The Berger Picard is a very energetic breed that is up for any type of activity. They are great at going on long hikes, swims, camping, bike rides, you name it! They are generally fairly easy to train in obedience as they just love to keep busy and love being given a task. If you and your family are looking for a sweet-natured dog to go on long hikes or swims with, consider getting the wonderful Berger Picard!